Love animals? Some of your favorite British actors do, too… and they aren’t shy about it either!

Cats have been our friends for over 5,000 years. But we domesticated their canine counterpart up to 40,000 years ago (according to L.R. Botigué in a study published in Nature Communications). So, it's no surprise we're infatuated with our domesticated animal friends…

Without further introduction, enjoy this list of our favorite British actors and their pets.

If you want to mention your favorite, let us know in the comments.

Doc Martin may not be a fan of dogs, but Martin Clunes sure is. He even starred in a show called Martin Clunes: A Man & His Dogs about the relationship between humans and dog throughout history. Most recently, he reprises his role as Doc Martin, along with new productions like Manhunt, Vanity Fair, and Warren.

If you’re going to discover your family history, you need your current family with you, right? Jeremy Irons definitely considers his dogs part of the family. Two can be seen in his episode of Who Do You Think You Are? where he learns about his family history and why he feels connected to Ireland.

Most recently, he’s been in comic book productions. He played Alfred, Batman’s butler, in Batman vs Superman and Justice League. Soon, he’ll appear on HBO in the television remake of Watchmen (with a modern twist) based on the DC comic. My personal favorite is his performance as Shakespeare’s Henry the Fourth in The Hollow Crown.

The newest Spider-Man, Tom Holland, starred in The Impossible with Ewan McGregor and Naomi Watts as his first feature-length film when he was just fourteen… and he stole the show. Today, he takes his Staffordshire Bull Terror with him everywhere, including interviews and publicity events. He isn’t shy about his love for Tessa! You can see more of Tessa from his official account @tomholland2013 on Instagram.

If Arthur looks familiar to you, that’s because he's famous, too! He played Redbeard in Sherlock, which she also starred in, along with her partner at the time, Martin Freeman. The connections don’t stop there. Sherlock’s parents were played by Benedict Cumberbatch’s real parents and young Sherlock is played by Stephen Moffat’s son. (Moffat is one of the writers and the ex-showrunner of Doctor Who). Amanda was recently in Safe on Netflix, Sherlock, Flack, and The Queen and I.

She just loves dogs. You can see her pictured with other people's dogs, too.
Her Twitter is @CHIMPSINSOCKS

Another day in Paradise, another day's training complete on The Witcher! The Bear has some crazy focus going on here. He's learning well…. #Witcher #Kal #BearSchool #Netflix

Henry Cavill isn’t shy about his love for his dog, either. Kal, an American Akita, follows Cavill everywhere. Kal is named after Superman (real name: Kal-El before he was named Clark Kent). Cavill played Superman in Man of Steel, Batman vs Superman, and Justice League.

Most recently, he was in Mission Impossible: Fallout and will soon appear on Netflix as Geralt of Rivea in The Witcher series about a monster hunter with supernatural abilities. Rather than the popular video games, the series will be based on the original Polish books by Andrzej Sapkowski. Sapkowski has published eight books in the series since 1993 and three popular video games have been made. 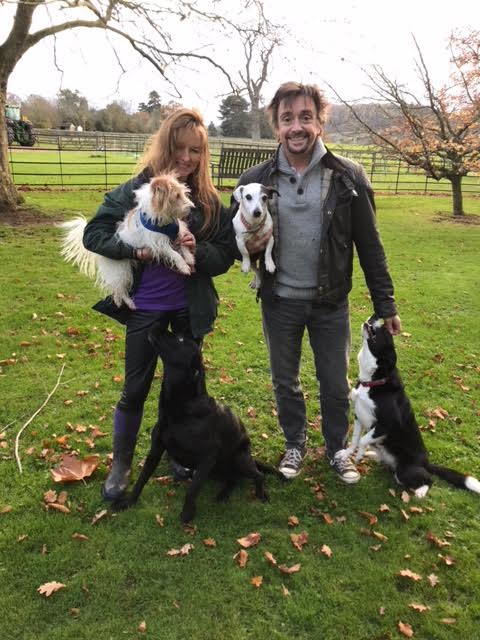 Richard Hammond of Top Gear and The Grand Tour fame lives on a farm with his wife, Mindy, their two daughters, and plenty of dogs and other animals. Their dog TG “tee gee” (for Top Gear”) is featured as the Top Gear Dog in a number of episodes. She was a labradoodle, but has since passed away peacefully. She did not have many appearances on Top Gear because she was afraid of the crowd and did not like riding in the car, but she was beloved by her family at home.

Pictured with Mrs and Mr Hammond are: Blea, Captain, Dimple Chicken and Sparrow. Richard Hammond continues to work in the automotive and travelogue field: three seasons of The Grand Tour are available on Amazon Prime.

You can read more about the dogs pictured here on PetsPajamas.

Thanks for all your advice about starting my nature reserve. I can’t think of a better legacy. My cat couldn’t give a fuck, of course. pic.twitter.com/9lNlAmvNts

Ricky Gervais loves animals, but he and his cat, Ollie, are inseparable! Recently, he’s been busy writing, directing, and starring in the Netflix series After Life. In the show, his character has a beautiful dog called Brandy. Recently, it was announced he would be working on an animated adaption of his book Flanimals about seemingly useless animals and their behavior.

Tom Hardy is very public about his love of dogs. He is often pictured with fans’ dogs and has publicly defended the Pit Bull breed by pointing out they have the highest military honor and were often called nanny dogs. Without extensive research, it's hard to tell which dogs are his and which ones are just random ones he has to get a photo with!

Tom Hardy got his break in Christopher Nolan’s film Inception and has recently started Taboo, Peaky Blinders, and Venom. He will reprise his role in Venom in the sequel. Hardy will also star in a television adaption of A Christmas Carol.

Tom Baker, popularly known as the fourth Doctor Who, is a massive fan of cats. Even his official website has a page titled For Cat Lovers Only. Of course, it’s a gallery of him through the years with many cats. The captions are worth a look. Recently, he has voiced video game characters and narrated films. In 2013, he reprised his role as the fourth Doctor on the 50th anniversary special, The Day of the Doctor.
You can see more here: https://www.tombakerofficial.com/for-cat-lovers-only/

Kate Beckinsale loves her cat. Even though it poops on her bed. She even called in a cat-whisperer to figure out why.

Beckinsale has recently starred in The Widow for Amazon Prime. She was also in Love & Friendship, an Amazon Prime adaption of the epistolary novel written by Jane Austen.

When your cat takes a selfie, you messed up fam.

Miller, also known as Sherlock Holmes in Elementary, loves animals, too. He has a pet cat who makes frequent appearances on his Instagram account. Miller starred in Danny Boyle’s famous film, Trainspotting (and the sequel), along with two Jane Austen adaptions: Mansfield Park and Emma. He was the lead in The Flying Scotsman, too. The final season of Elementary will air this autumn on CBS. It's not strictly British, but his British accent and the twisting mysteries will smooth you over.

This is Nana ?She's not in #TheDurrells on @itv at 8pm but some other dogs are. AND there's cricket, cake, donkeys & hats. See you then! ☀️ pic.twitter.com/aCdF7n82rz

Keeley Hawes has been on fire lately, from her loving role as the mother in The Durrells in Corfu… to an astute politician in The Bodyguard.

Even more recently, she starred in the espionage thriller, Traitors. She will also appear in Misbehavior, a film about a group of women who devise a plan to disrupt the 1970 Miss World beauty competition in London.

But, this busy lifestyle doesn’t keep her from loving and admiring her dog, Nana!

‘Ello, Pet! We couldn’t finish this list without mentioning Brenda Blethyn, the star of long-running detective show Vera, based on the books by Ann Cleeves (whose other books also inspired ITV’s Shetland). Blethyn recently adopted her first dog ever. (Yes, ever!)

Liberty is a writer from Ohio, but pretends she's in the English countryside sipping some Earl Grey, nibbling on some Jaffa Cakes, and wondering who stole her TARDIS.

We work hard to create this content. To help pay for that time, we frequently use affiliate links in our posts. When you click on links on this site and make a purchase, we may, in some cases, receive a commission for that referral.