Note: This is a copy of our August 12th newsletter. Want to sign up to get these delivered to your inbox (and skip all the flashy ads)? You can CLICK HERE to sign up to get our emails roughly once or twice weekly.

While most of the British TV shows we talk about are available through BritBox, Acorn TV, Netflix, Hulu, PBS, or Amazon Prime Video, good ones do occasionally pop up elsewhere.

Some of them are even good enough to justify a trial or month-long subscription. Ted Lasso (on Apple TV+) is one of those shows. The series follows Ted Lasso, the relentlessly positive small-time American football coach who's hired to go and coach professional football in England – despite the fact that he has no experience with football.

I'll admit that I don't typically like shows that revolve around the world of sports. I dutifully watched the first episode expecting to hate it, but by the end, I was pleasantly surprised. Even those characters who are initially grating become much less so as their stories are filled out. It's the kind of show people like to say “has heart”.

If you've one of those people who's been trying to get your husband into British TV, this is another one of those great gateway shows likely to appeal to both genders (we also recommend Line of Duty and Peaky Blinders for converting reluctant men to the British TV obsession – you wouldn't believe how many emails we get about this).

There are 10 episodes in the first season and 12 in the second (currently airing weekly) – and it's been renewed for a third. You can check out the trailer HERE.

If you decide to give it a go, there are a few other British shows you may want to check out on Apple TV+:

You may also want to check out the hit drama The Morning Show. Though its main stars are American (Jennifer Aniston, Reese Witherspoon, and Steve Carell), you'll spot quite a few familiar British faces, including: 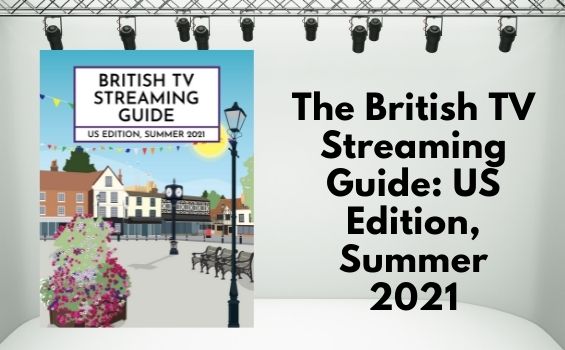 Looking for something great to watch while you're keeping cool indoors? The US Edition of the British TV Streaming Guide (Summer 2021) is now in stock and shipping.

Ever wish you had a printed list (with descriptions) for everything on Acorn TV or BritBox, or a list of the available British shows on Netflix or the PBS Masterpiece channel? That's exactly what this is – along with an index in back for quick lookup by show name.

(Or click HERE if you prefer to buy on Amazon)

Want to add a British TV Variety Puzzle book for just $6 more? Click HERE instead. We're thrilled to see it has a 5-star average over on Amazon (but we still welcome your feedback about ways to make the next one even better).

This Week in British TV News… 30+ of the Best British Female Detective Shows – As much as I love a good “grumpy old man” detective, sometimes it's nice to see a woman taking the lead on a murder investigation. Here are some of the best.

TV Shows Like Death in Paradise – While we eagerly await this year's Christmas special, here are some viewing suggestions from contributor Liberty White.

Oakhurst House: A Creepy Derbyshire Destination – While the UK does a remarkable job of embracing history and restoring/preserving old buildings, that doesn't mean there aren't a few ruins about the place. In this post, we take a look at the history of the creepy Oakhurst House.


The Top 20 Hyacinth Bucket Quotes – Is there any character in British TV history who's gotten as many great lines as dear Mrs. Bucket?

I Heart British TV designs at TeePublic – Looking for a fun new shirt or mask for the summer? TeePublic has loads of great British and British-TV themed designs (and not just in our little shop).


The Pemberley Candle – Alas, Fitzwilliam Darcy and Pemberley are not real – but this Earl Grey-scented candle can help set the mood when you're reading the book or watching the miniseries (1995, of course) for the millionth time.